Nostoc. sp can produce blackish-green pigmentation which leaches into the substrate on which it is growing. The algal species Desmococcus olivaceus produces bright green colouration of buildings as shown below. 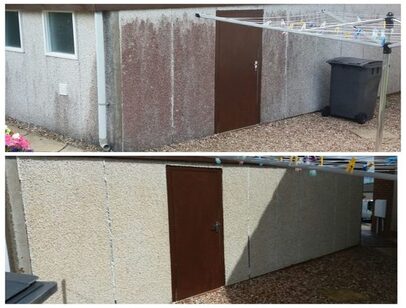 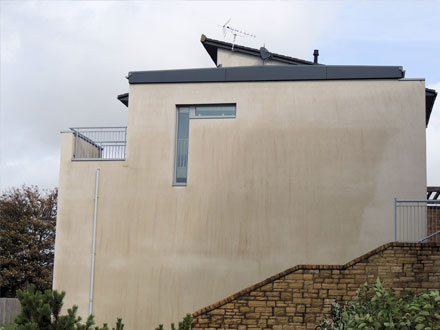 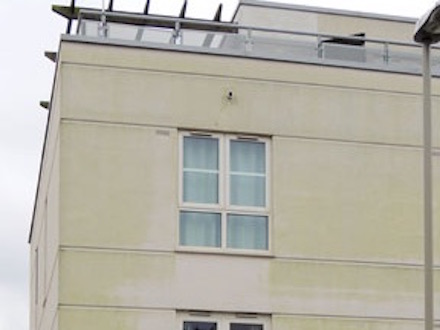 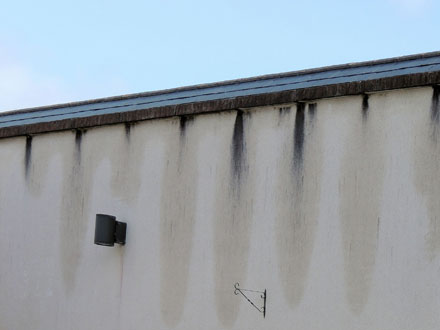 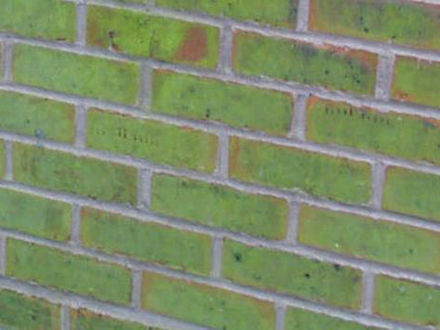 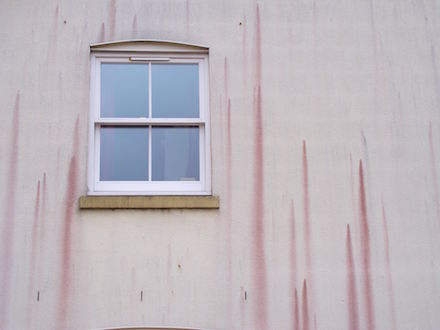 A Biofilm forms when certain microorganisms adhere to a surface in a moist environment and begin to reproduce.Biofilm formation on surfaces usually starts with phototrophic organisms (algae, cyanobacteria) which use carbon dioxide (CO2) from the atmosphere and sunlight as their carbon and energy source.

Heterotrophic organisms (most bacteria and all fungi) need some organic source for their growth, and this is provided by the metabolites of phototrophic organisms or by airborne deposition. The biofilm community is therefore sometimes formed by a single microbial species, but in nature biofilms almost always consist of mixtures of many species of bacteria, as well as fungi, algae, yeasts, protozoa, and other microorganisms, along with non-living debris and corrosion products.

All biofilm forming microorganisms may cause biodeterioration and degrade stone or render mechanically, chemically and aesthetically through the metabolic activities and biomineralization process in these biofilms. 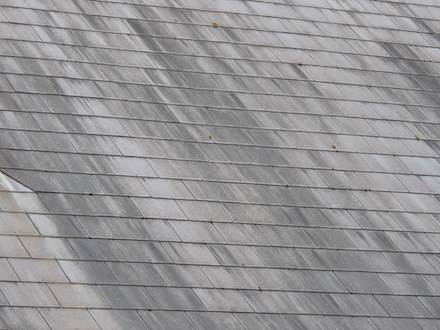 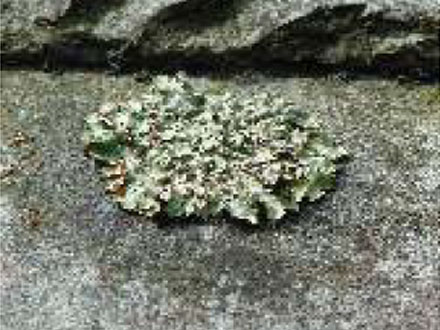 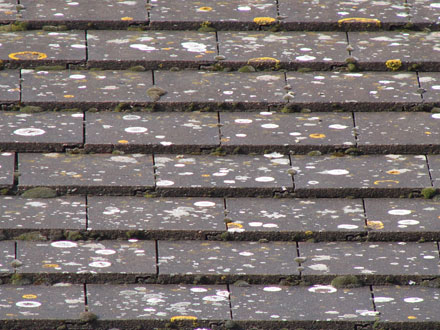 The porosity of the surface, it’s mineral composition, alkalinity and it’s ability to retain air borne sea salts creates an environment favourable to the settlement of microrganisms. Studies on biofilms, along with their potential damage to a range of substrates, has led to investigations of a range of building substrates, coatings etc.

It is apparent that some species, in particular pigment-producing fungi (Alternaria, Penicillium, Aspergillus), can lead to deterioration of appearance which, even after removal of the species itself, can be difficult to remove.

Botanically, mosses are non-vascular plants in the land plant division Bryophyta. They require sufficient moisture, access to nutrients and harvest sunlight to create food by photosynthesis. There are approximately 14,500 species of mosses. The most common species in urban Ireland are the greycushioned grimmia, Grimmia pulvinata; thickpoint grimmia, Schistidium crassipilum; and the wall screwmoss Tortula muralis.

Although mosses do not cause direct damage to roof tiles, they increase water capillary creep causing in the fullness of time corrosion of the fixings and ageing of the overall structure. They can cause some lifting when growing in the vertical bond. As they absorb moisture, they also add weight to roofs and when they become heavy enough or dislodged by bird activity etc, they can fall in gutters and down pipes and cause blockages.

On the ground the deleterious effects of mosses is slower to take effects,except on artificial grass, where they rapidly clog the drainage leading to runaway maintenance issues. It is recommended to clear moss before treatment. This is done by hand on roofs, or mechanical brushing on the ground, particularly on artificial grass. AlgoClear® Pro being deactivated in contact with biomass, it makes good sense to reduce it’s volume before applying the biocide.
Moss are part of the Bryophytes and, unlike plants have no vascular tissue and reproduce by the production of spores. They are prolifically produced by fungi, moss and, in particular ferns. Most spores are distributed by wind. Typically, spores are released in early May, for a period of about one week. Prior to release, the spore sacks are ripening, but once the conditions are appropriate, they release the spores and thereafter the spore sacks are empty.

Hence, the major period of concern for spread is limited the high sporulation period. Quaternary Ammonium Compounds (DDAC) are not effective at killing spores due to the spores having a thickened cell wall. However, as the spores begin to germinate, they produce protonema which are thread-like filaments which grow and colonise the substrate on which they have established.

The protonema have thin cell walls and it is at this stage that the DDAC is able to penetrate protonema and disrupt the cells, killing the organism prior to it becoming established on surfaces. In addition to the effectiveness against moss, AlgoClear® Pro is an extremely effective algaecide and will be effective at reducing these species colonising most surfaces.

A lichen consists of 2 or more partners that live together symbiotically, with both of them benefiting from the alliance. One partner is a fungus. The other is either an alga – 90% of known lichen – commonly Trebouxia, then Trentepohlia or a cyanobacterium – about 8%, commonly Nostoc. The alga or cyanobacterium is able to use sunlight to produce essential nutrients by photosynthesis that feed both partners. The fungus creates a body, called a thallus, in which they both live.

The fungus also produces chemical compounds that may act as sunscreen to protect the photosynthetic partner. There are more than 1,700 species of lichen in the British Isles. Approximately 30,000 species of lichen have been described and identified worldwide. The algal partners in lichens can be found living on their own in nature, as free-living species in their own right.

The fungal partners in British lichens are recognizable Ascomycetes or Basidiomycetes. However, they have come to need the right kind of algal partner in order to survive. Unlike other fungi or indeed their algal partner, they cannot survive on their own.Lichens have a variety of different growth forms.The simplest lichens are crusts of loosely mixed fungal hyphae and algae. Others are more complex, with leafy or shrubby forms like miniature trees, also having specialised structures to attach them to a surface. 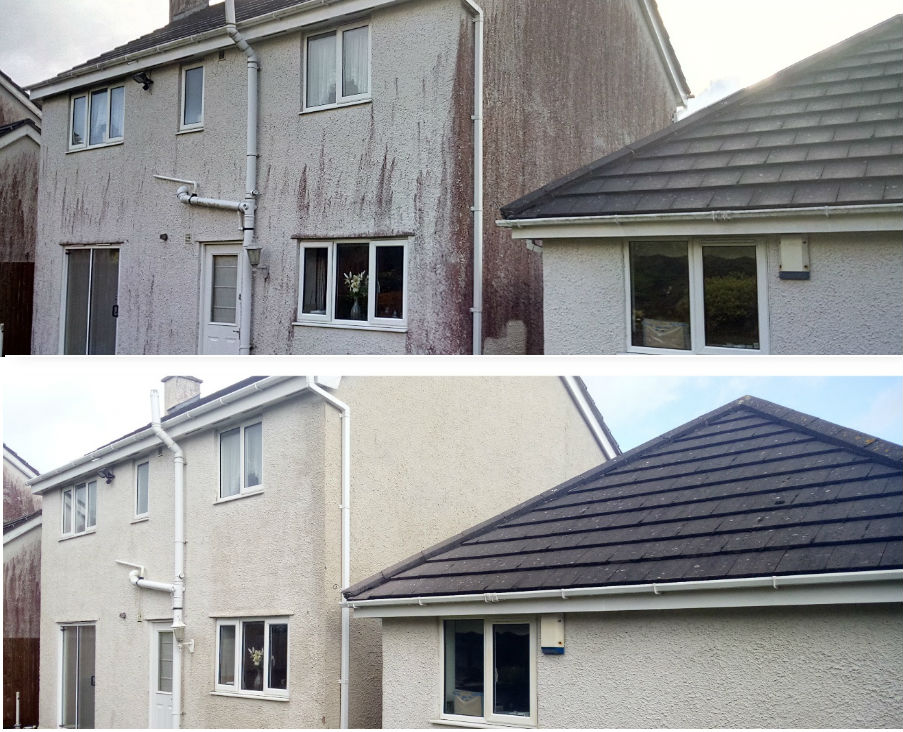 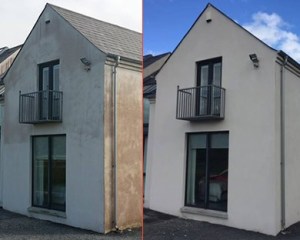 The genus Trentepohlia would not, at first glance, be taken as a green alga. Free-living species are mostly yellow to bright orange or red-brown in colour, due to the orange pigment, haematochrome (β-carotene), which usually hides the green of the chlorophyll. The genus is terrestrial and is often found in Europe on rocks, walls and tree bark. Where they are found on buildings, they can cause severe mechanical degradation and deterioration.

Western Ireland is a cold temperate area with high levels of rainfall and humidity. This area therefore supports a high level of rich and diversified algal flora. Trentepholia have been identified as one of the most common species to be isolated from walls and buildings in this region (Rindi, Guiry 2002).

Chemoorganotrophic fungi are especially concentrated in stone crusts. They are able to penetrate into the rock material by hyphal growth and by biocorrosive activity, due to the excretion of organic acids or by the oxidation of mineral forming cations, preferably iron and manganese.

This can often leave a rust-like stain on paving slabs even after washing. The deterioration activities of dematiaceous fungi also include the discolouration of stone surfaces, due to the excretion of the dark pigmented melanin Species capable of such staining are Alternaria

Aureobasidium, Cladosporium and Penicillium spp. The photographs below show a building wall covered with fungal growth (identified as Alternaria) sp.. The microscopic images show the development of fungal hyphae and on close-up, the pigmented spores can be seen.

Filamentous fungi are composed of many cells forming thread-like hyphae which form a mycelium, or network of hyphae. Most fungal species prefer to grow at acid to neutral pH (3-6) and only require 30% moisture to survive. From these dense mats, aerial reproductive hyphae (known as conidiophores) will release millions of spores into the space directly.

The most common contaminants on substrates such as roofs, pavements and walls are the pigment producing Aureobasidiumsp sp., and Cladosporium sp. and Alternaria sp. These species will rapidly spread and colonise many surfaces causing disfigurement and decay by the release of pigments and acids respectively.

Indeed there are scientific studies that have identified over 22 fungal flora including filamentous micro fungi to be present on sandstone buildings. The major contaminant isolated was Aspergillus sp. which produced dark pigments and organic acids which were responsible for the decay of the sandstone historical monument. 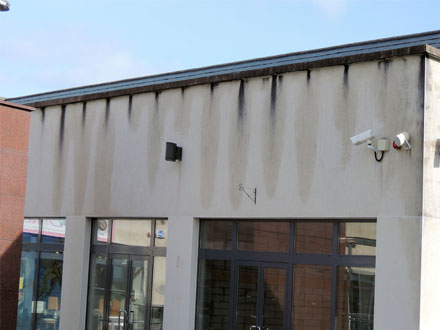 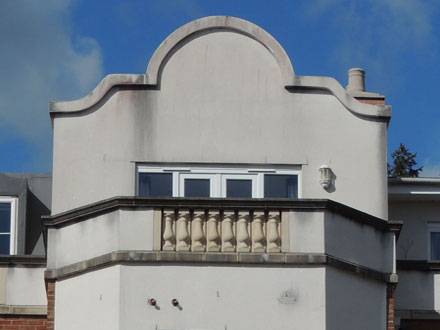 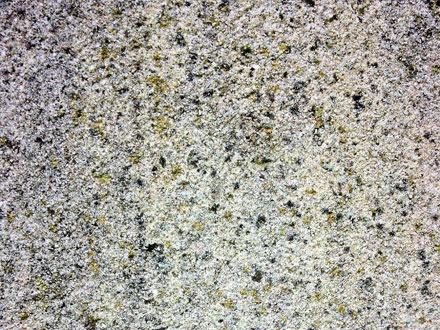 We are locally based in Northwest of England and service areas sorrounding:
Merseyside
Lancashire
Cheshire
Other areas upon request

Send us your details and we will get in touch to discuss your project.